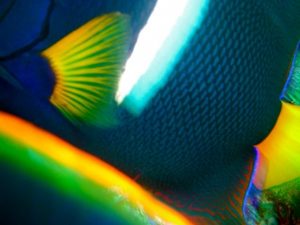 Dirty Rock, also called the widow due to its solitary position rather than any other more sinister reason, is known as being home to schools of friendly fish.  Located between the coast and the main island, only a small part of this pinnacle island is visible above the water. Dirty rock is often the first of a two tank dive as it has depths of up to 90 ft.

Imagine that during your dive you suddenly see flashes of colour and realise you have an entire entourage of colourful fish swimming along with you! Dirty rock has been for many years well known for its schools of king angelfish accompanied by surgeon fish and barber fish that tag along on your dives.

This site is better suited to certified divers and those who like to take their time. If there are any currents it is difficult to visit dirty rock as being a pinnacle it makes the dive short as you cannot change direction.

Giant mantas have been seen cruising by, using the king angels to get cleaned.   Marine life that is commonly seen includes moray eels, octopus, other large schools of fishes including jacks and grunts, round rays and the occasionally a seahorse or a white tip reef shark.