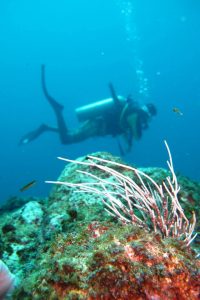 When the tide is low, Elephant rock has a formation that makes it appear like an elephant with its trunk in the water. It is a site known for its rock formations, with all different size boulders, leaving little cracks and caves and also some small pinnacle formations. The layering of rocks here is clearly visible in some places.

This site can be explored in different directions, allowing you to drop to 90ft or stay at a little shallower 40ft so is accessible to most divers. The folding and stacking of the rocks here leave plenty of  hiding holes for creatures to hide out. White tips hide in small caves or on the sandy bottom towards the northern area.